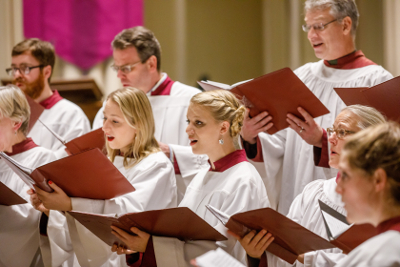 The Notre Dame Basilica Schola was founded in 1998 by Dr. Gail L. Walton, who served as the long-time Director of Music of Notre Dame's Basilica of the Sacred Heart. The choir is currently under the direction of Dr. Jonathan Hehn, OSL, who succeeded Dr. Andrew J. McShane, director from 2008-2018. The Basilica Schola specializes in unaccompanied sacred choral music; its core repertoire of Renaissance polyphony is augmented by works from nearly every style-period in Western music, including sacred vocal jazz. The choir's core identity is as a liturgical ensemble that calls the Basilica of Sacred Heart its home. In addition to regularly singing for Sunday evening Vespers in the Basilica, the choir also sings periodically for Masses and other special services during the academic year at Notre Dame.

The Basilica Schola also frequently sings concerts on campus and occasionally performs in the wider community. In the Spring of 2018, the Schola sang the North-American premiere of a newly rediscovered Mass, "Missa in Ecclesia," by the renowned French composer Jean Titelouze (1562/3-1633). In 2019, the choir produced a live video recording of Easter Vespers in the Basilica of the Sacred Heart, which was released later that year.

The choir holds auditions and welcomes some new members each year from the among the students, faculty, and staff of the university. For more information about joining the choir, please contact the director. 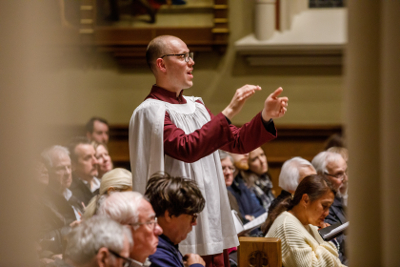 Jonathan Hehn, OSL, is a musician and liturgist currently serving as Choral Program Director and Organist at the University of Notre Dame. He is a brother in the Order of Saint Luke and holds degrees in music (BM, DM) from the Florida State University and theology (MSM, MA) from the University Notre Dame. Additional time was spent at the Universität Mozarteum in Salzburg, Austria. Jonathan has won prizes in both regional and national competitions in organ performance and remains active as a performer and organ clinician.

A scholar in the area of sacred music and liturgy as well, Jonathan has presented at both national and international conferences, and his written work has appeared in The American Organist, The Hymn, These Days, Call to Worship, Doxology, and other print and online periodicals. He currently edits Doxology, a peer-reviewed journal of worship and the sacramental life published by the Order of Saint Luke.

Jonathan resides in South Bend, Indiana with his wife, three children, and dog. A passionate practitioner, writer, and thinker, you can find him on Facebook, Twitter, and Instagram @JonathanHehn.